We filed into the large tired drab auditorium in relative silence. Having only arrived twenty four hours before, no significant relationships had yet been formed. As good English citizens do, we formed an orderly line along the edge of the stage at the front of the auditorium to claim our refreshments, other's didn't queue. Brews of Arabic and English tea was boiling away.....sadly, to be served in white plastic cups. “Take two cups, one inside the other”, we were advised, “and be careful it could be very hot”. Most of us plumped for the English brew, although weak and very milky, at this early stage we were not brave enough to try the Arabic. To my surprise, and sadness, no fine English “rose patterned” bone china teacups (or PG Tips) were anywhere insight; weak, milky and white plastics cups it was then.


Having identified parents and carers at my classroom room door in England by their faces, style and personalities, it was astounding at induction to be informed in Arabia, and more importantly in this fee paying British Curriculum school, this was not so. Forty three teachers sat, aghast, when advised of the recommended tactics we were expected to use.
With thirty children in my class who were delivered and collected by different carers each day this ranked highly as the most stressful part of my day. It was not necessarily the children’s parents that collected; it could be a driver, nanny, maid, governess, grandparent or parent. And if these were female, it was a pretty much given that they would be encapsulated in black from head to toe with only their eyes showing.


As you all know Arabian men do not cover their faces, so for me it was gratifying when a male turned up to do the after school pick up. Unfortunately the fathers did not pick up regularly; generally a female member of the family appeared outside my door. Pick up was easier if not Muslim by faith or the lady came from a bordering country, as generally one saw the face and the female was only ensconced in the scarf. Any female Muslim was, more often than not, covered from head to toe in the abaya, scarf and veil and the more fundamental the more layers of black voile covered their faces. The most fundamental ladies even wore thick black gloves, tights and socks and some of the older generations wore a metal plate across the centre of their face. No flesh to be visible to the world at all, especially to men other than their immediate male family members.
Traditionally, the Burqa, was worn by the Bedouin women to protect them from the sun, sand and extreme elements on their nomadic travels through the desert. Wearing the Burqa is not an Islamic requirement and is traditionally steeped in local customs, culture and traditions. What is mandatory in Islam is to wear cloth or clothing that cover the whole body, including the hair, except the face and hands. The cloth or clothing (abaya) must not be tight so as to show off or enhance the female form and should not be transparent to make the under garments visible. It is stated that women "cover up" to preserve their modesty and out of respect for their husbands. Arabic women explained to me that the hair, lips and body are all classed as sexual symbols and these must not be on view to any man other than immediate male members of the family and behind the families front door. 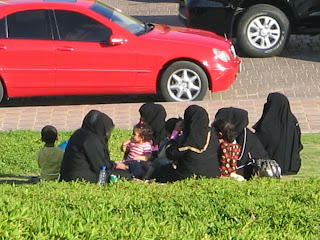 So, in the humid dank auditorium, and in the management’s wisdom, we were tutored to ensure we learnt, and had the ability to, recognise each mother or female by, what was classed as normal practices, in this rural small Arabian town. Given a list to digest, a gasp and sharp intake of breath moved through the auditorium like a Mexican wave. Frowns, raised eyebrows and rolling of eyes were visible all around me but to my amazement management just glossed over our astonishment. Queries and comments were ignored and basically we were told to “get in with it”.
Dismissively, we were given our comprehensive list of recommended ways of recognising the covered women at our classroom doors. It was seriously recommended that we learn the sound of each mothers voice and then we were given a list of other helpful additions to observe, take note of and recognise.....rings, brooches, jewellery, shoes, handbags and even the decoration on their veils or abaya. It was even suggested that we recognise the way they walk. Scared, flabbergasted and in a state of shock, I really didn't digest much more of that induction, as, I am sure did no one else. These practices were to haunt me every day of my teaching life in Arabia. I never did feel comfortable and was always terrified I would let a child go home with the wrong person.


The end of the school day was a very stressful time. I would shake and my heart would race and I could hear it beating in my chest. I was unable to bring myself to leave my classroom door or trust anyone else to see my class home safely. I saw my children home safely myself every single day. The only person I felt I could trust (if I was otherwise engaged in other teaching responsibilities) was my Lebanese teaching assistant, although I was constantly worried about the repercussions of child being lost or taken.
On several occasions, we heard of men disguising themselves in the Burqa and Hijab (veil), clad in black from head to toe and wearing ladies shoes, attempting to kidnap young children from schools for organ donation which would be sold to friends, acquaintances and family in other parts of the world. This was shocking and outrageous and caused much condemnation among me and my colleagues. The criminals carrying out these disgusting deeds were part of a sophisticated underworld that somehow secured much personal information about a particular child in a particular school and often managed to get by school security and arrive at the classroom door. As teachers and carers, no matter how worried and stressed we were, we could be nothing but vigilant, responsible and wise. This was normal practice in this part of the world and this was the way it was. Terrifying and completely beyond my understanding, I found myself ever over cautious at my classroom door. I am pleased to tell you my children went home safely with the right adult at all times.


At the end of each day, as you can well imagine, a strong brew (with a mars bar) was always a welcome and relaxing interlude in the staffroom after all the children were safely reunited with their families.
Posted by Mrs Teacup at 09:30