Come, settle down with a good brew, curl up somewhere comfy, grab a blanket and enjoy my next adventure…

Sitting out under Arabian clear skies, twinkling stars, a bright moon and some unusual critters in evening temperatures of 32 degrees (and above) around the most beautiful camp fire I had ever seen with special friends, was truly a delight. I had never camped before in my life, so to camp in the middle of nowhere with complete strangers – human, reptile and animal (insects abound) – was a bit scary. This was another one of those amazing experiences and learning curves for me, Mrs T. 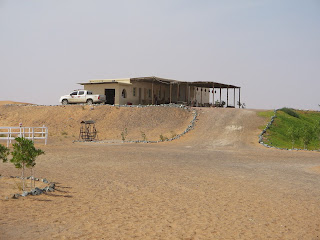 Circumstances had brought us together, all teachers in a foreign land, and now, as a close group of friends, we set off in a convoy of four wheel drives, in high spirits, across barren arid terrain that quickly became barer and more desolate as we left the city behind us and ventured deeper and deeper into the golden desert. Camels, sand dunes and dusty roads were all we could see for miles, both left and right, for the entirety of our road trip. It was long, but not winding, a straight and dusty highway that stretched ahead forever and disappeared over the horizon and way beyond leading us into an adventure like we had never experienced before. Fifty or so miles into the heart of the desert and weaving through vivid tangerine wind sculptured, massive dunes, the size of mountains, we finally arrived at the stately and prestigious Arabian stud ranch which was to be our home and camp for the next few days and where we were to participate in a traditional Bedouin camp under the clear starry starry desert night skies.

Our kindly and generous hosts had already set up the extremely striking Arabian camp; three large cream hexagonal tents strategically and perfectly placed in an arc around a black ash pit where we would eventually build our own camp fire. The smell was potent; a distinctive blend of dust, sand, soot and Arabian horse manure filled the air. Wood had to be gathered in the desert dusk for the fire so several of the group volunteered to head off in search of as much parched branches and scrub as they could muster. Much was found and proudly dragged back to camp and a huge fire was started which we all instantly moved close to and sat around to warm ourselves. The desert gets cold in the evenings. The fire was comforting, warm and atmospheric and lively chatter, laughter and sipping filled the air. Rapidly, ornate and beautifully woven blankets, robes and pashmina's were rummaged and shared out to each and every one of us. It felt luxurious and rich to be ensconced in such fabrics and traditions. Our hosts supplied a large ornate filigree engraved silver teapot full of water, which was hung on a stake over the vast fire to boil. While waiting for it to boil, we all busied ourselves with unpacking and settling into camp by filling our tents with our belongings and supplies. There was one hexagonal tent per family group and I had one all to myself.

We all settled back around the fire and sated ourselves with delicious food and drink. The atmosphere, like nothing I had experienced before, was oozing from under regal blankets and pashminas as we relished each other’s conversation and company. Under the clear Arabian starry skies laughter echoed, chatter could be heard; Arabian music trickled softly in the background while the cicadas clicked their night music and the stallions whinnied from sandy paddocks nearby. Spiders and critters scurried beneath our feet, the odd desert wren tweeted its song and an Arabian owl twit ta wooed as the night moved in. The whole atmosphere and scene was amazing and had the essence of a storybook. Life long friendships were being forged and memories made during this trip. 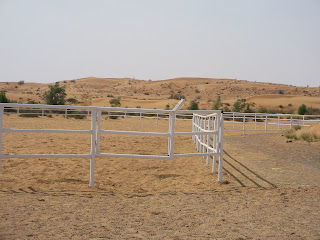 The exquisite filigree teapot whistled its readiness and the hot sweet weak Arabian night cap was offered to all in petite clear delicately engraved glass mugs which was a welcome finale after our dinner of meats, Halloumi, salads, breads and humus. Content, happy and relaxed, seated around the fire we all settled down to share our life experiences; what a way to experience camping for the first time. As the sun disappeared behind the mountainous dunes, changing the colours of landscape as it retired, each one of us, as if taking turns, began to respectfully retreat to our most elaborate tents for some well-earned rest.

My Bedouin tent was beautiful and glamorous; extravagantly furnished with exotic Persian cushions along each wall of my hexagonal Arabian bedroom. The fabric were elaborate and complex; the colours rich and the fabrics expensive. Persian carpets covered the sandy floor and burgundy silks draped the inner walls tied back perfectly with gold tasseled rope. Seductive reds, purples and gold formed heady hallucinations and thoughts of the harems, belly dancers and camel trains in times gone by. When I closed your eyes I could imagine the traditional Bedouin men and women’s past lifestyles. The desert smells and sounds added to the atmosphere. When ready to retire I was shown how, traditionally, to push several of the exquisite heavy cushions together along one wall to make my bed. At the rear of the tent was a cream voile fabric screen for me to use as a changing space giving added privacy and creating a dressing room. 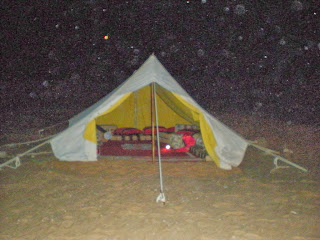 I had been very apprehensive about this trip but there was no need; it was amazing. I experienced, as authentically as possible the Bedouin way of life over that weekend. It was so enjoyable we repeated it many times during my time in Arabia. I slept well and rose at dawn to see the sun come up over the dunes and to the smell of bacon and eggs cooking on the grand fire. The days were relaxing, playing traditional games, watching Arabian Stallions manoeuvre through the dunes and sharing our lives around the fire pit in between cooking and preparing hot tea.

On this occasion no PG Tips were required or appropriate, weak sweet Arabian tea in beautifully engraved glass mugs was the order of the weekend and Mrs Teacup was quite content, happy and satisfied. Nothing could have been better in our Bedouin camp or added to the atmosphere. Sometimes tea needs to be different for different occasions in different parts of the world for different reasons. This was definitely one of those occasions and reasons.
Posted by Mrs Teacup at 02:13