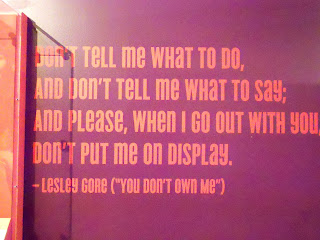 Victim blaming is a devaluing act where the victim of a crime, an accident, or any type of abusive maltreatment is held as wholly or partially responsible for the wrongful conduct committed against them.
definitions.uslegal.com

Victim blaming occurs when the victim of a crime or any wrongful act is held entirely or partially responsible for the harm that befell them. Secondary victimisation is the re-traumatization of the sexual assault, abuse, or rape victim through the responses of individuals and institutions.
wikipedia.org

I was told by a therapist that my behaviour during my abuse assisted my abuser to continue to abuse me. It’s taken years for me to get that phrase out of my head and also to analyse and understand what she meant. Today I understand but do not wholly agree with her analysis. You see I knew no different; I mirrored my parents’ marriage which obviously I thought was normal but today I realise my parents’ marriage was a circumstance of the era and culture (1953) that had also been normalised for them because they mirrored their parents and grandparents. We learn from the people around us, our prime carers, those that are with us day to day and therefore I cannot take all the blame for the abuse I suffered. Consequently, if we grow up with prime carers and extended family that are abusers over time this becomes normalised, you see we do not know what goes on in others family homes, so what we see and know in our own homes is how our brain patterns our own "normal". Victims of abuse then spend years undoing and un-patterning beliefs and behaviours that actually are not normal. I found that the emotional and psychological trauma of "finding out" that my "normal" was a lie was worse than any physical abuse. The betrayal of loved ones who should have cared for me loved me unconditionally and kept me safe was almost too much to bear. The epiphany of waking up to this betrayal and knowledge, and understanding that because of a lie, I went on to marry my abuser and didn't recognise or see the red flags right in front of me because my "normal" was all I knew.

My abuser also learnt from his parents, grandparents and family around him too and due to a certain amount of dysfunction and lack of parenting he grew up with a warped view of life, marriage, parenting and fatherhood. His brain had also been patterned to think his upbringing and home life was "normal". The way he treated me is the way he had been treated all his life from a small boy but this has taken me the best part of twenty years to unpick all this. The brains of victims of acute trauma wire differently; it can be a lifetime of unpicking and unravelling what happened to us and some of us are never able to unpick all the levels of trauma inflicted on us.

Friends also victim blame; I lost serval close and important lifelong friends due to my abuse. They didn’t believe me, they believed him. He was able to continue to bluff some friends with his "charm" and they were gaslit and groomed to believe that I had made up my abuse because I "wanted the attention" before he went on to tell others "I had been sectioned". Disbelieving the victim’s story and minimising the severity of the abuse is secondary victimisation and causes many forms of mental health issues, e.g. post-traumatic stress disorder and complex post-traumatic stress disorder, dissociation, bipolar disorder and in many cases leads to substance abuse, self-harm, eating disorders and in some cases, suicide.

Victims of abuse do not need you or the community to blame them, they already feel guilt, shame, betrayal, anger – victims of abuse of any description do not need any of you to rub it in because they already feel bad enough. Our perpetrators have spent years grooming and gaslighting us to believe we are to blame and worthless; that our behaviour and responses to their behaviour make us somehow the guilty party. I was raised to believe you worked on a marriage, that you forgave and forgot, that tomorrow is a new day – so what did I do – I did just that and I got up the following morning after being subjected to his vile words and forgave, forgot and just got on with it. But I never told my abuser until just before I fled, that I hated the way he spoke to me and hated the way he treated me.

By this time it was too late, I did not love him anymore and certainly did not like him, I was done and nothing in his power or on this earth was going to change my mind. Once I saw the light and made up my mind, it was interesting how I took back my power and he became weak and clutching at straws he tried to bad mouth me and discredit me. He continued for three plus years to try to make me out to be something I am not. He was scrabbling around in the gutter for anything that would make him feel good about himself, you see once I had left he had lost one hell of a chunk of power.

It’s so easy to blame the victim but let me give you a few myths around victim blaming:

So stop focusing on the victim and focus on the abuser; the abuser is the one who must carry the blame. No one asks to be abused, raped or assaulted and no one deserves it either under any circumstances. We need to dispel the myths that we can just get over it or he or she must have done something to deserve the abuse. The abuser is to blame – fact.

Laura Niemi, a postdoctoral associate in psychology at Harvard University

We also need to dispel the myth that many victims of abuse disclose their stories with the sole aim of obtaining compensation – untrue – fact. Most victims of abuse just want justice; just want to be believed and see their abuser named and shamed and convicted of the insidious crime that has been committed. Let’s concentrate on the abuser, give our energy to outing abusers, if we do not do this we are complicit, we allow them to hold on to the power. Let’s speak up for victims and break this chain, break the silence, break the cycle. The time is now, so many coming forward, so many speaking up and out, so will you think about all I have said and join me on this International Women’s Day and raise your voices and save at least one victim of abuse.